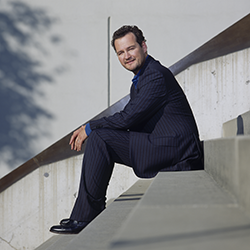 Operatic baritone Russell Braun has received the Oskar Morawetz Award for Excellence in Music Performance. This prize honours the legacy of Oskar Morawetz, one of Canada’s leading composers of contemporary music, whose career spanned more than 50 years. It is presented biennially to an outstanding Canadian performer in the field of classical music, recognizing talent and commitment to Canadian music.

Russell was selected for this award by a jury of music professionals convened by the Ontario Arts Council. The jury, which was unanimous in its decision, stated: “Russell’s powerful voice and strong stage presence have made him a highly sought-after artist by the world’s major opera companies. Along with his stellar international reputation, he also makes it a point to maintain his commitment and connection to Canadian music and composers – including Oskar Morawetz.”

The award presentation took place on Wednesday, February 19, 2020, following that evening’s performance of the Canadian Opera Company’s Hansel & Gretel, in which he is performing the role of Peter. The award was co-presented by Claudia Morawetz, daughter of Oskar Morawetz, and Judith Gelber, vice-chair of the Ontario Arts Council board of directors.

In response to receiving the award, Russell said: “It fills me with a great sense of honour to receive the Oskar Morawetz Award. I am humbled to be in the company of other esteemed Canadian artists who have received this prize. I had the great privilege to meet Oskar Morawetz, and I saw how, through his keen sense of storytelling, he was able to express Canada’s place in history in a way that was informed by his own personal experience, empathy and sense of humour. Thank you to the award jurors, the Morawetz family and to all brave composers who express their voice and entrust artists to speak eternally for them.”